Following the success of the first edition, I decided to renew the The Ones That Got Away series for another post this time. For those who missed the first post, you can find it here. Basically, I will be reviewing the careers of the gymnasts that never really made the big time and eventually fizzled out, never reaching their full potentials. Here we go with Part Two;

Dana Point native, Shantessa Pama, was touted to become a 2008 U.S. Olympic team member for sure, however, it was not mean’t to be for her. Back in 2002, aged 11 at the time, Pama made her elite debut as a HOPES elite at the U.S. Challenge, finishing 10th all-around. A year later, Pama clinched the U.S. Challenge title and had shown vast improvement. In 2004, Shantessa rose to the elite ranks, where she would finish 11th in the all-around. A good start for a 13-year old! At this time, Pama could do a triple back bars dismount! The following season, aged 14, she had her best Nationals showing of her career – 5th in the all-around. In 2006, Shantessa received two international assignments; placing 4th at the Gymnix Invitational and winning three individual medals at the Pacific Rim Championships, also helping the team’s success. Her 2006 domesic elite season was much more quiet though; finishing 9th all-around. In 2007, she battled through injury but was sidelined throughout the whole season which eventually prompted her move to Level 10 for the 2008 season, with the intent of maybe qualifying for elite for the 2008 season. Pama had a rather mediocre 2008 season, eventually placing 12th at Regionals; not receiving a qualification spot to J.O. Nationals. She then turned her attention to college gymnastics, graduating from Dana Hills HS in 2009. Shantessa had expressed interest in attending UCLA, Stanford or Georgia. According to one source, Marta Karolyi, the U.S. National team co-ordinator, caught wind of Tessa’s lifestyle choices of having boyfriends and her general attitude; and didn’t like what she saw – ending all invitations to National Team camps. Anywho, Pama retired from Gymnastics and enrolled in a community college. She later started coaching at Gym-Max Gymnastics, the gym she came from, but has since stopped. Additionally, Pama contemplated comebacks for both the 2010 and 2011 seasons but they never took off the ground! Personally, I feel that Pama’s story is disappointing because, like many of the gymnasts featured in these posts, she showed so much promise in her earlier years and just burnt out in the latter stages of her career. If the allegations that arose with Marta prove to be true, I think that is rather a flimsy reason to ‘disinvite’ her from training camps but, as we often believe, Marta definitely has her favorites and evidently Shantessa wasn’t one of them. 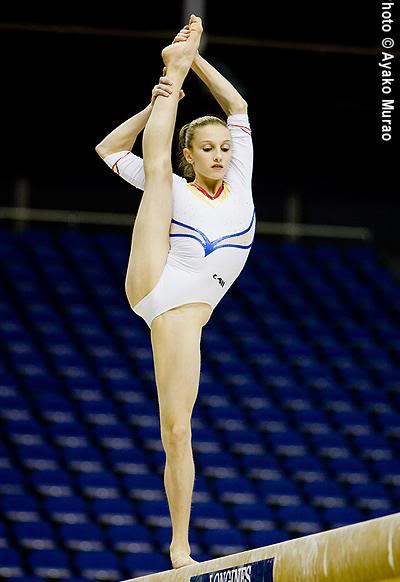 A gymnast that the Gymternet hold very dearly in their hearts is the Romanian gem that is Ana Porgras. The first real look the Gymternet got of Ana was at the 2008 Junior Europeans; held in Clermont-Ferrand. At this Championship, she took home the Beam title, as well as contributing to the team’s fourth place finish and individually finishing ninth all-around. Even towards the end of her junior career, injury was not on her side, requiring surgery to repair a detatched knee ligament. Porgras’ first senior elite season was 2009. She was sidelined from Europeans that year because she was still recovering from the knee surgery. She was back on form for the latter stages of 2009, taking home the National title and later making the Romanian Worlds team. She garnered four individual final qualification spots after the qualification round. In the all-around final, Porgras fell on beam and could’ve easily found herself on the podium, had she not have fallen. Composed for redemption in the three event finals, Porgras found herself with a silver medal on bars, later. She was later seventh on beam and fifth on floor. Once again battling through injury, Ana was a member of the 2010 Europeans team, in Birmingham, England. She contributed well to the team but, in the team final, sustained an injury during her beam dismount which took her out of the remainder of the competition. Later, she was diagnosed with a crack in her right fibula. After a few months of rehabiliation, Porgras was poised for success and defended her National title; earning a spot on the 2010 Romanian Worlds team. At Worlds, she finished fifth in the all-around final but later, clinched the World Beam title over a very strong field. This title, at the time, was the first for Romania since Andrea Raducan’s two golds in 2001. The 2011 season was to be Porgras’ final competitive season, however, we weren’t aware of this at the time! At Europeans in Berlin, Ana competed two events only (UB & BB) and failed to make either event finals. She got her third National title in August and made the 2011 Worlds team. This was Porgras’ poorest Worlds performance ever; failing to make any event finals. However, she did make the all-around final and finished sixth. She also was awarded with the Longines Prize of Elegance; an exclusive award given to the most artistic gymnast of the Championship. This was the last time we’d ever see Ana in competition *cries*. Porgras announced her retirement during January 2012; following an elbow injury sustained during a training camp in France. This was merely seven months away from the London 2012 Olympic Games. Porgras’ absence proved to be a severe blow to the Romanian Olympic team. Porgras’ story is exceptionally sad. I feel that the fact that she came so close to making the Olympics makes her situation so much sadder. As well as sustaining her elbow injury, I believe that Porgras was quite unhappy in Gymnastics during this time and quit out of ‘boredom’ or that she’d ‘had enough’ of the sport. Honestly, I didn’t see her retirement coming and thought she would’ve been a shoe-in for the Romanian Olympic team.

Known as Darlene Hill until 2008, Darling Hill had a very short lived tenure at the top. Growing up in an unsafe area, to be blunt, her mother was largely into drugs and she and her sister, Melissa, were later taken in by her grandmother, Elouise Dixon. Initially starting out in dance class with her cousins, her aunt later found Will-Moor Gymnastics in Mt Laurel, N.J. Hill remained with the club throughout her entire career, training under Kim Bonus. The only result that I can find that archive back to her Optional career was her performances at 2004 J.O. Nationals; where she was National Champion for the Junior B division. In 2007, Hill graduated from Lenape High School and qualified to Senior International Elite, with the intent to make the 2008 Olympics a year later. Hill finished third all-around at U.S. Classic and later, took home ninth place at Nationals. This result earned her a spot on the U.S. National team and a chance to compete at the 2007 Glasgow Grand Prix, where she came fourth on bars.

Poised for success in 2008, ready to make the Olympic team, Hill’s life was suddenly turned upside down when she was given the news that her grandmother had passed away. Without any time to mourn, a couple of weeks after her grandmother’s funeral, Hill travelled with the U.S. team to compete at the Pacific-Rim Championships in San Jose, California. Hill put her hurt to one side and contributed to the team’s gold medal winning performance as well as taking home the floor title. The rest of the 2008 season was no where near as happy as Darlene would’ve wanted it to be have been but she knew she had to keep moving forward if she wanted to achieve her goals and make her grandmother proud. At Nationals, Hill placed 20th all-around but was still given an Olympic Trials spot. At the Trials, she finished 16th and the selection committee didn’t name her to the Olympic team, nor as an alternate. It is necessary to mention that during this season, Darlene was dealing with shoulder muscle strains, a hyperextended left knee and a sprained left ankle. Not making the team was a big blow to Darlene but she moved forward. During 2008, Hill signed a sponsorship agreement with Gattaca and so therefore, forfeited her NCAA eligibility. Hill’s next goal was to get healthy for the 2009 season but a comeback proved too much – due to the extent of her shoulder problems. However, it was not all bad news for Darlene. Since 2008, Hill resumed conversation with father, Tyrone Hill, and her mother, Vivian Hill, whom she had never met, finally called her and agreed to meet her. As far as we understand, she is still in contact with both of them.

I see a Romanian-USA theme going on here! Blendea is a disappointing addition to this list because of how young she was when she retired. Born on January 8, 1999 in the Romanian commune of Borascu, Blendea made her National debut at the 2009 Romanian Schools competition, where she picked up three golds. In 2010, she was added to the Romanian Junior National team and was third at Nationals. Later, she travelled to Charleroi, Belgium, to compete at the 2010 TopGym tournament and eventually placed 14th all-around. Madalina celebrated her best season ever in 2011, winning every single event at School Nationals! She also finished third at Nationals, sixth place at the ROU-FIN-GER-ITA quad meet and took the all-around title at the Alpen Adria Cup. She had a quiet 2012 season, competing at School Nationals only. In 2013, her final season as a gymnast, Blendea was fourth at the FRA-ROU Junior friendly and third at Romanian Teams.  In early 2014, aged merely 15 years old, Madalina announced her retirement from Gymnastics! After a successful junior career, we never got to know how Madalina would fare as a Senior athlete. No ‘reason’ behind her retirment has been issued, as far as I am aware. Evidently, it was not mean’t to be for Blendea, who showed so much promise as a junior. 😦

Well, this concludes the second edition in this series! I am definitely going to continue this series so stay tuned for further posts and if you have any suggestions on who we could feature; contact me through E-mail or Twitter.

Read more in the The Ones That Got Away series here: